Ascension Day is an often overlooked day in the Christian calendar, but it wasn’t always so. It always occurs 40 days after 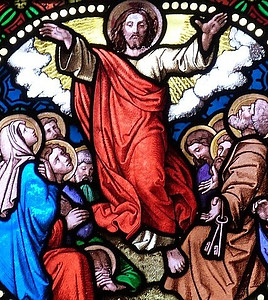 Easter, the Feast of the Resurrection, so it will always be on a Thursday. It commemorates Jesus’ Ascension into heaven as it is told in three places in the New Testament.

Mark 16:19-20 – “So then the Lord Jesus, after he had spoken to them, was taken up into heaven and sat down at the right hand of God. And they went out and proclaimed the good news everywhere, while the Lord worked with them and confirmed the message by the signs that accompanied it.”

Luke 24: 50-53 – “Then he led them out as far as Bethany, and, lifting up his hands, he blessed them. While he was blessing them, he withdrew from them and was carried up into heaven. And they worshiped him, and returned to Jerusalem with great joy; and they were continually in the temple blessing God.”

Acts 1:9 – “When he had said this, as they were watching, he was lifted up, and a cloud took him out of their sight.”

The Gloria, an ancient hymn that dates from the 4th century, also embodies the Ascension, “Lord Jesus Christ, only Son of the Father, Lord God, Lamb of God, you take away the sin of the world: have mercy on us; you are seated at the right hand of the Father: receive our prayer.”

These affirmations state that Jesus is alive and seated in the place of honor at the right hand of God the Father. His purpose is to hear our prayers and return at the appropriate time to judge us. Christians do not fear the judgment because Jesus forgives our sins, indeed, has already forgiven our sins by his death on the Cross.

It has been observed since the beginning of the Church with historical references beginning in the 4th century. This observance is mentioned by several of the Church Fathers including Eusebius, St John Chrysostom, St Gregory of Nyssa, and the Pilgrimage of Egeria, which is a woman’s travelogue (perhaps the first blog??) of her journey to the Holy Land. She documents the observance of Ascension Day and Pentecost in the Church in Bethlehem believed to have been built over the place where Jesus was born.

It is observed by all Christian Churches although in some places it’s observed on a Sunday, instead of the Thursday. It is also observed as an octave of eight days.

Other Traditions Associated With Ascension Day

Some symbols associated with Ascension Day include the Lion Slaying the Dragon, which symbolizes Christ slaying the devil; Birds Flying Homeward, which is Christ going home to heaven on this day; Open Gates, which symbolizes Christ going to Heaven to prepare a place for us; and Elijah’s Fiery Chariot, where the story of Elijah being taken up by angels in a chariot of fire, which prefigures Jesus’ Ascension into heaven.

The three days prior to Ascension Day are Rogation Days when farmers’ and their crops were blessed by the parish priest. There are processions led by the cross with torches and the priest and parishioners to mark the parish boundaries so that everyone knew what they were. Beating the bounds is still practiced today in some places, but in a more limited way. The practice dates back to Anglo-Saxon times.

How You Can Make Ascension Day More Meaningful

Ascension Day is the final part of Easter in that it completes what began during Holy Week with Jesus’ death and resurrection with the final piece of Jesus ascending in to heaven. This completes his work on earth and begins his work with the Father in heaven.

On earth, Jesus taught us how to live and how to act in relationship with each other. In his death and resurrection, he conquered sin and death so that we would no longer have to fear judgment in this life. In his ascension, he prepares a place for us in heaven and sends us the Holy Spirit as our advocate so that we will never have to go through our lives alone.

And Your Christmas Creche

The shepherds were the first ones to recognize Jesus after his birth. These shepherds may have followed Jesus during his ministry, and they may have rejoiced at the news of his resurrection.

The magi knew that Jesus was a king because of the star that announced his birth. We don’t know, but they may have followed his public ministry with interest.

Joseph, Jesus’ earthly father, died before he could see Jesus’ earthly ministry. You can think about what he may have thought about everything that happened.

Lastly, there is Mary, Jesus’ mother. She stood by him from his birth and throughout his ministry. She knew everything that the angels and the prophets said about him. She stood by and watched him die while standing at the foot of the cross. She was in the upper room when Mary Magdalene came bursting in with the news that Jesus was risen. She’s lived a roller coaster of emotions in watching Jesus’ successful public ministry, then descend into the depths of depression in watching his trial and death, and finally experience the joy of seeing the fulfillment of all of the prophesies.

Thanks for reading my ramblings. Please continue the conversion in the comments.

4 Replies to “Ascension Day: Why It Matters”