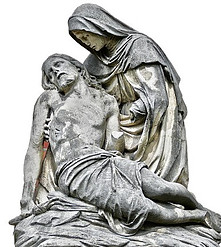 What is a Mother?

There are many types of mothers. The one most of us is familiar with is the one who gave birth to us and raised

The widely accepted version of what a mother should be lives within your Christmas Creche. This is the Blessed Virgin Mary. In March (customarily March 25th since it is nine months before Christmas), she is visited by the Archangel Gabriel who tells her that she will bear the Son of God, the Messiah, and that he is to be named Jesus, Yeshua, Isa. This was a common name of the time that means God is Salvation. Mary had the option of saying, “No” to God and Gabriel, but she does not. She accepts God’s will for her and by so doing, she ensures that we are all saved through Jesus. This is the importance of the Annunciation. It is not that God was coming into the world, but that Mary said, “Yes, let it be unto me according to your will.”

Consider this and what it means. A girl of about 15 years held the fate of humankind in her hands. Her faith said, “Yes” to Gabriel and God. It is no wonder that she is the model of motherhood for all of us.

Mary and the Birth of Jesus

We know Mary, but we don’t know much about Mary. In the Gospels, we find her as a young woman, probably about 15, who was betrothed to the carpenter, Joseph. Mary accompanies Joseph to Bethlehem for the census ordered by the Roman Emperor Tiberius. They went to Bethlehem so that Joseph and his new wife would be counted in Joseph’s family which was of the lineage of King David. This is why the Gospel of Matthew begins with the lineage of Jesus through Joseph. But if Jesus’ father is God, why give Joseph’s lineage. In the culture of the time, the lineage was recorded through the father. Joseph was also visited by an angel when he was considering breaking his engagement to Mary, and he also consented to raise Jesus as his own.

In the Gospel story we love so much, Jesus is born in a stable and laid in a manger among the cattle and donkey. But then 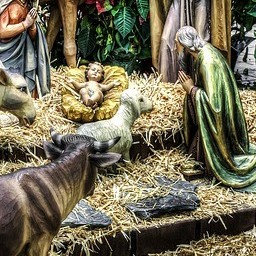 he and his parents have some unusual visitors. The first visitors are the shepherds (although probably not the sheep – at least, not all of them). The shepherds were in the hills tending their flocks when the angels appeared to them and announced that they should go find the Christ child. They told Mary and Joseph about the angels and what they were told. The Gospel says that Mary treasured up these things and pondered them in her heart.

During their stay in Bethlehem, Jesus would have been circumcised when he was eight days old in accordance with Jewish custom. Mary would have stayed home for 40 days as she would have been considered ritually unclean. At the end of this period, Mary and Joseph would have taken Jesus to Jerusalem to the Temple for his presentation as was required by Jewish law for boys who open their mothers’ wombs. When they were leaving the Temple after Jesus’ presentation, they encountered an old man named Simeon, who, because of his devotion, had been promised that he would not die until he had seen the Messiah. On encountering Jesus and his parents, Simeon exclaims,

Lord, now you are letting your servant depart in peace,

according to your word;

for my eyes have seen your salvation

that you have prepared in the presence of all peoples,

a light for revelation to the Gentiles,

and for glory to your people Israel.” (NRSV)

This is now sung during Evening Prayer in Anglican Churches as the Nunc Dimitiis. Simeon also tells Mary, “Behold, this child is appointed for the fall and rising of many in Israel, and for a sign that is opposed (and a sword will pierce through your own soul also), so that thoughts from many hearts may be revealed.” (NRSV) Mary and Joseph would have returned to Bethlehem with Jesus.

At this point, the Magi or Wise Men, visit her in Bethlehem because they had been following the star that appeared in the sky over the place where Jesus lay. The Magi did not visit right away like the shepherds did because they lived much further away and had to see the star, determine what the star meant, and then make the journey. This is why the visit of the Magi is celebrated on the Feast of the Epiphany on January 6th, twelve days after Christmas. The Magi present Jesus with three gifts: Gold (as a symbol of his kingship), Frankincense (to symbolize Jesus’ self-sacrifice), and Myrrh (to symbolize his suffering and death).

Because the Magi had encountered King Herod when they entered Israel, the King was very jealous of any perceived threat to his throne. Herod asked the Magi to tell him where the baby was, but the Magi were warned to return home by a different path. Herod, in his anger, sent his army to Bethlehem to kill every baby boy aged two and under. This gives an estimate of how long Mary, Joseph and Jesus were in Bethlehem. They were warned by an angel to flee to Egypt where they remained until after Herod died and they returned to Nazareth because Herod’s son, Archelaus, was on the throne in Judea.

After Jesus grows up and starts his ministry, there are very few mentions of Mary. My favorite is when Jesus and his first disciples are visiting Mary in Nazareth. She takes Jesus and his disciples to a wedding in the village of Cana. The wine runs out at the wedding feast so Mary tells Jesus to take care of it. Jesus doesn’t want to, but Mary tells the servants to do whatever Jesus says. Jesus has the servants fill several large water jars with water which is then miraculously turned into wine. To me, that is not the point of the story. To me, the point is that Mary had not doubted that Jesus would do what she asked even though he protested. . . and he did. This is motherhood in action, for certain!! This is also probably the reason that may people ask Mary to intercede for them in their prayers. They know that Jesus/God will do whatever she asks.

Mary is mentioned again in a story where she and Jesus’ brothers are trying to see him while he is addressing the crowd. Jesus does not see them, but uses the opportunity to tell the crowd that those who do the will of the Father are his true mother and brothers. I don’t think that this was meant as an insult to Mary, but as a lesson to the crowd.

Mary At the Cross

Finally, Mary was at the foot of the cross when Jesus, her firstborn son, was crucified. Crucifixion was a gruesome way to

die. Victims usually died of asphyxiation. In addition, Jesus had been brutally whipped by the Romans so he would have been covered in his own blood. Yet Mary steadfastly remained with her son while he suffered and died on the cross. She held him one last time when he was taken down. This is what Simeon referred to when he told her that a sword would pierce through her own soul. In this world, there is nothing worse, in my opinion, than a parent losing their child. And watching it happen over the hours that it took had to be completely excruciating for Mary.

On Easter, Mary Magdalen was the one who saw the risen Jesus and brought word back to the upper room where the disciples were waiting. Tradition says that the Virgin Mary was there as well. She would have been able to rejoice to her beloved son risen again.

Thank you for joining me on this Mother’s Day mediation on the central figure of the Christmas Creche. If you have any comments, please join in the conversation.