A Christmas Creche is a depiction of the Holy Family of Jesus, Mary, and Joseph. It is usually displayed at Christmas time since the scene is designed to remember the birth of Jesus in Bethlehem which is celebrated at Christmas. The intent is to have something festive to remember the holiday and provide a counter to the snowmen and Santa Clauses that abound in December. 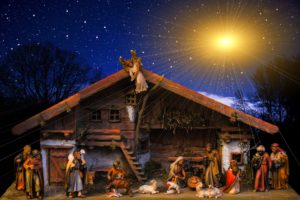 Creche or Nativity? Which is it?

It can be called a Creche or Nativity scene or a crib. All of these names are used interchangeably. The term creche is also used in the United Kingdom for a day nursery or what in the United States is day care. The British also use the term “crib” to refer to a Nativity scene.

Where did Christmas Creches originate?

Popular lore states that St Francis of Assisi created Creches or Nativity Scenes to remind the faithful of the poverty in which Jesus was born. St Francis’ own poverty stood in stark contrast to the wealth of his family and the Roman Catholic Church. He desired to return people’s worship back to faith as received from Jesus.

Although St Francis popularized the creche, it was likely around much earlier. St Francis and his Friars Minor moved around Europe and the Franciscan order grew rapidly which likely accounts for the spread of the custom around Europe. As people enjoyed the custom, it moved with them around the world. (Source: Encyclopedia Britannica)

Who are the characters in a Creche?

The basic characters in all creches are the baby Jesus, the Virgin Mary, and Joseph. Together, they are often referred to as the Holy Family. The basic idea of a creche is to commemorate the Nativity, or birth of Jesus. This also accounts

There can also be other animals present such as cows, and donkeys. The cows portray the barn where Jesus was born. They also provided the manger where He was laid after his birth. The donkey depicts the mode of travel used by Joseph and Mary as they traveled from Nazareth to Bethlehem for the Emperor Augustus’ census.

There are often shepherds and their sheep depicted in creches based on the Nativity story in the Gospel of Luke where the angel appeared to the shepherds watching their flocks of sheep and told them of the birth of Jesus. So they left and went to see the Baby Jesus in the manger.

The angels and the star will appear in some creches. They may be separate characters or the star might appear as a painted part of the background. Some creches have backgrounds that can be very elaborate and some just have the figures.

There are other local traditions that include other characters. I’ve heard stories that a firefighter was included in the scene because “they came from afar” (say that in a very Southern drawl and you’ll get it). Some include additional figures because someone just hid them there.

There is as much breadth and depth in the characters in a Creche or Nativity Scene as there are people around the world.

What are the rules for displaying a Creche or Nativity Scene?

There are no particular rules for displaying a Creche, but there are customs. Although the Creche is a Christmas tradition, many people put them up during Advent, the season of preparation for the Nativity. In many places, the Creche will be set up, but the manger will remain empty until Christmas because you can’t have the baby Jesus there until he is born.

Similarly, the Creche can be set up without Mary and Joseph. They can be placed farther away and moved closer each day during Advent to symbolize their journey from Nazareth to Bethlehem (by donkey, so don’t forget the donkey if your Creche has one).

Creches/Nativity Scenes should be fun!

Besides the static Creches, some places use a living Creche. This is where people are the different figures within the Nativity Scene. They will do this in warm or cold climates. I often felt sorry for those who are trying to stand in a tableau while the temperature is below freezing! These scenes will often include live sheep, cows, and donkeys which can make for an unexpected experience all on their own.

In short, there are many types of Creches or Nativity Scenes. They can be large, small, elaborate, painted on ornaments, constructed of local materials, serious, and humorous. I saw a stunning creche that was constructed entirely of seashells. I also have a rubber ducky set that just consists of the rubber ducky versions of the Creche characters.

The Christmas Creche is an object of devotion, but also of celebration. The type of Creche you display should have meaning for you because it is part of your holiday observance. Whether you are a devout Christian, or just someone who enjoys the different facets of the Christmas holiday, both religious and secular, there is a Christmas Creche waiting for you!

4 Replies to “Christmas Creche: What is it?”